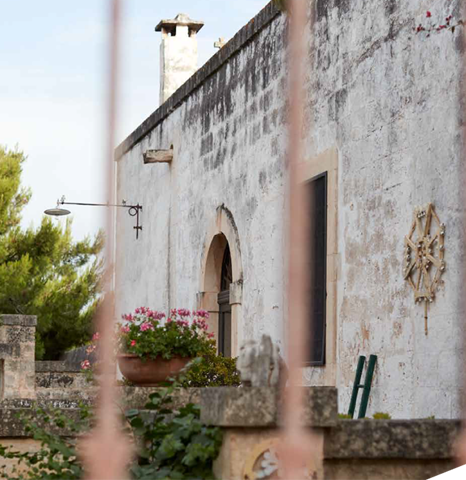 The history of the Apulian Masserie

The Masseria in Puglia are ancient structures, often created as farms.

In Puglia there are hundreds of Masseria that have been converted into hotels, this for their timeless beauty and for the great attractions increasingly appreciated by tourists who find authenticity and great relaxation!

The term derives from "masserizie" (household items, furniture, various tools, food warehouses for human and animal use) that were kept inside typical stone buildings where farmers, shepherds and the owners themselves lived.

Some of these Masseria in Puglia, owned by wealthy families, were built with walls and defensive towers to defend themselves even from attacks by hostile populations. In the most common cases, they served as small agricultural "villages".

The Masseria were in fact also used as stables and deposits for fodder and inhabited by agricultural laborers but often also by the landowners themselves. The old Masseria in Puglia represent the model of the house with a typical enclosure, consisting of high walls and a central space (courtyard or courtyard), overlooked by the entrances of the various buildings.

In the more recent Masseria of the nineteenth century the perimeter walls are less impressive and the internal courtyard larger and at times have been modified into real villas for especially summer residences.

A large and sturdy entrance door gave access to the internal courtyard, the upper floors were inhabited by the owners while the lower floors were occupied by peasants and others as storage and stables for the animals.

The Masseria in Puglia, were created as agricultural centres, which suffered for a period of neglect until, with a targeted political and strategic action, it was decided to convert them into real charming structures that preserve the most authentic Apulian culture.

In this way, the safeguarding and conservation of these historical monuments was guaranteed. The Masseria in Puglia, such as Masseria Brigantino, resemble the "colonial aciendas" in southern Spain and Latin America.

Discover the beauties of Masseria Brigantino, its main attractions and the prestigious structure that will offer you great hospitality and relaxation all year round. Contact us to book your Made in Puglia holiday.

Let's dispel the myth of the summer! The best season to relax in Puglia and enjoy the beauties ...